Why Toy Story 4 Fails on the Disability Narrative 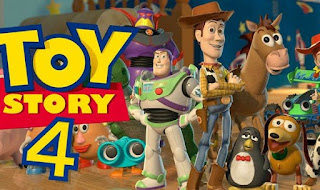 Why Toy Story 4 Fails on the Disability Narrative


We all see the world from our own perception - I guess what other way to see it is there? As a author I often write in multiple points of view, so I have an insight into how perceptions can differ to a situation from a variety of characters. An example of this could be three people are standing on the sand at the beach. One is loving the sand between her toes and the wind whipping her hair in her face. It makes her feel at peace and content. One is hating the sand clinging to her feet and is wondering how she is going to get all the sand out of her car after their day at the beach. The third would rather have gone to the pool for a swim as she hates sea water, the lice, the seaweed and any other critter that may be in there too!

We can see from that brief scenario, three different reactions to the one situation.

Yesterday I went to see Toy Story 4, the latest instalment by Disney. I have really enjoyed the Toy Story franchise and have a Woody and Jessie doll. They belonged to my son and his name, Nick, is written on the sole of Woody's shoe. So you can see that nice memories are connected to these films. 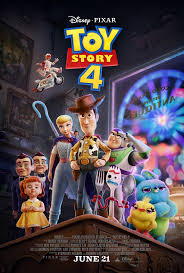 I was quite excited to see number  4, as I'd read an online article at Variety.com that spoke about the film raising awareness of disabilities. As a disability and inclusion advocate, and a visually impaired lady, this excited me. When I posted this article on my Facebook page, the comments back did not match the article...so I went with an open mind, and not quite as excited as I initially was. .

Click on this link to read the opinion piece:

Variety.com - Toy Story 4 Shows How Representation of Disabiliities Can Change the World 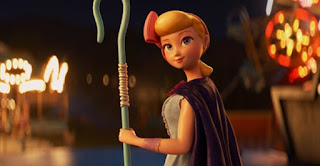 Now with that headline I think you can see why I was excited.

So how did I feel at the end of the movie?

In three words, severely let down.


Let me explain why I was so disappointed, by referring to the three elements that the article highlighted as being great disability narrative. 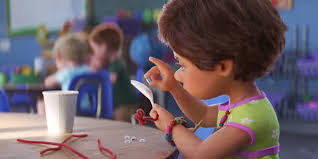 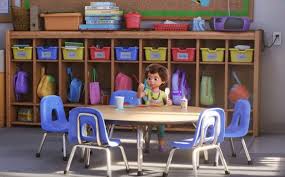 1) Child in the Kindergarten has a cochlear implant.
There is only one main Kindergarten scene. The scene shows the first day of Kindergarten for Bonnie, the little girl who now owns the Toy Story team of toys. She doesn't have a good start as the other children completely ignore her. See the pictures above from the movie. Woody has sneaked to the Kindergarten in her bag as he is worried about her (she didn't want to go). He sees her distress in being left alone (where was the teacher???) and rescues some craft supplies from the trash can for her, and she makes 'Forky' who becomes her favourite toy. Now as I was watching Bonnie, I did not take a lot of notice of the other kids who were around her, and in the background, as none of them interacted with her. Apparently one of those other children according to the article had a cochlear implant but I do not know which one. I hope it wasn't the 'trash boy'. (My son did not notice the child either and he has perfect vision...)

My Tip - If I was the scriptwriter I would have the child with the cochlear implant interact with Bonnie to make it more noticeable. Put it out there. That child could have made their own forky with Bonnie. 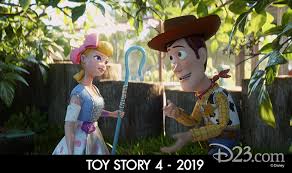 2) Bo Peep's Arm Breaks
Yes Bo Peep's arm breaks and she says to Woody who is horrified, that it happens all the time and she is fine with it. She laughs and swings with only one arm and is strong. BUT then she gets the tape and tapes it back on, then is back to being a normal two armed doll with no disability. See the picture I found above. (I don't quite get that her arm doesn't need to be bandaged all the time, but I will go with the creativity of it.)

My Tip - Again if I was the scriptwriter and wanted to use Bo for disability awareness, make the amputation permanent, and have her coping with it like amputees do. 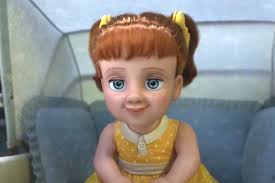 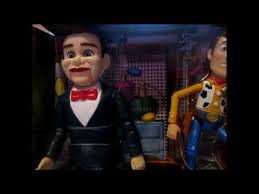 3)  Gabby Gabby feels she isn't loved by a child because she has a broken voice box
Gabby Gabby is a creepy character, living in an antique store being guarded by multiple Benson dolls, which my youngest daughter called Snappy from the movie IT. This part of the movie played out like a horror movie to me. She is the villain of the story, wanting to forcibly take Woody's working voice box to replace her own which has never worked (was defective as she called it).She says that if her voice box worked, she would have a child and be loved, like Woody was. So with the help of her evil Benson doll guards, she corners Woody and manipulates him into giving her his voice box.This whole scene I have a problem with, particularly if it is meant to show disabilities in a good light... which it doesn't.

At the end of the movie we see Gabby Gabby deciding to go after a lost child at the carnival. The little lost girl, picks her up, pulls on her voice box cord, and she speaks perfectly. The girl cuddles her and they go off happily and the girl is found by her parents.

So if we reflect on this, in light of the article, Gabby Gabby's storyline is to reflect imperfections in humans and that we can be loved as we are. BUT, now this is a big BUT... she is not loved for how she was. Gabby is loved at the end after her 'disability or imperfection' is fixed. If we relate this to disabilities, it is saying that a person with a disability can't be loved just the way they are - they have to be fixed.

My Tip - I think it's pretty self explanatory - have an imperfect doll being loved for its imperfection.

I have gone looking to see if there are any other articles on this subject and I found one that I like:

Hollywoodreporter.com - The Trouble with Toy Story 4 and Its Disability Narrative

This article brought up a couple of extra points that I agree with.

It is the 'normal' abled-bodied character (Woody) who rescues Gabby Gabby. It is he who talks to her after Harmony, the owner's granddaughter rejects her after her voice box is fixed. Wouldn't it have been nice to see another disabled toy help her? They could have had a broken Benson or one of the other toys in the antique shop reach out to her...

Kristen Lopez finishes her article with: And from a disabled perspective, she certainly helps me think that perhaps some representation is better than none at all. Now, from my own disabled perspective, I don't agree with this. If movies are going to portray disabled characters they need to be empowering and not ableist. They must show that people with disabilities are perfect in their imperfections and are happy to be the way they are. Being disabled can be a great thing! 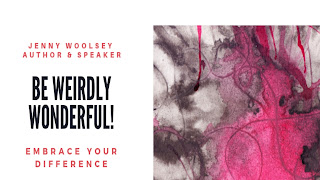