I couldn't pass up the opportunity to promote my new children's novel, Ride High Pineapple. I began writing this book officially in 2014, though there had been a few sporadic attempts before then over fifteen years; the book being partly written in numerous forms but put away for another day. Never ever finished. Why? Because the subject matter of Ride High Pineapple - not the pineapple part, as I love pineapples - was too close to home.

It was having a face that was different, labelled initially as 'Crouzon Disease', caused by a rare genetic mutation of a chromosome. This change in the chromosome told the cells forming the bones of the skull and face to stop growing too early.

In a 1977 Australian Women's Weekly magazine article a child with this syndrome was described as having a 'grotesque' deformity. At the time I was nine years-old and I thought I was more severe than that child - so what did that make me?

Being born with this syndrome (at some stage it was renamed from being a disease to a syndrome), directed my life. It affected the happiness of my childhood. It affected how people treated me. People thought that they had the right to pass their judgements and prejudices onto me. I was different and that wasn't okay. It affected my personality. It affected the decisions I made in my life. It also has led me to write this book and be an advocate for facial differences, which is a positive thing.

And I am here to tell you, that it is okay to be different. It is okay to be born with a face that has grown in a different way, no matter what other people may think or say.

I wish this book had been around when I was a teenager.

So why did I write this book? 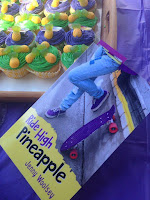 On my re-working of one of the early manuscripts of Ride High Pineapple, I added another dimension of myself to Issy. Something I knew I had but didn't have a name for - Generalised Anxiety Disorder. I was only diagnosed in 2013, in my 40s, after suffering with it since a child. So as a good writer does and with lots of awareness happening at the moment about mental illness, I gave Issy this as well. In the book all sorts of things stress her out and give her symptoms. 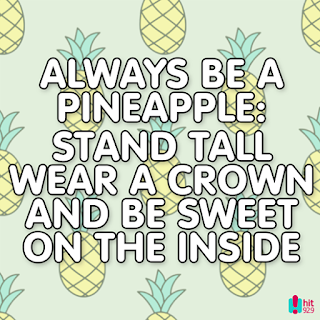 Some other interesting facts about Ride High Pineapple.
The story is written as a journal. It is raw, honest and gutsy.  The characters in the story are fictitious but there are parts of the story that are factual.
For example:
*Issy gives a speech to her Year Nine class. This speech was based on the speech my daughter presented to her Year Eight class to explain her face. I changed it to suit the story.
*At the time of writing the novel, my daughter loved skateboarding, so this was the influence for the sport. She also had an accident on her board, face planting on the concrete. Because of her facial surgeries we had to take her to the hospital to make sure her nose wasn't broken or damage had been done to the bones in her face.
* The medical and hospital information is all true, based on my own and my children's experiences.

So I would love your support in helping to promote Ride High Pineapple. Let's be partners! Please spread the word about my book and  buy a book or download the ebook.