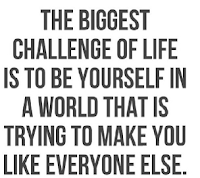 D is for Difference


My daughter’s home reader this week was an abridged version of the The Ugly Duckling, the renown fairy tale by Hans Christian Andersen. I am sure you knows the story but in case you don’t, let me retell it quickly.


A mother duck is sitting on a clutch of eggs. The eggs crack open and out pop six ducklings. One of the ducklings though is not like the others. Because he looks bigger and is a different colour, he is classified as ugly. This duckling doesn’t fit in with any of the farm animals, is laughed at and no one will play with him. His mother tries to comfort him, but to no avail. The ugly duckling feels lonely, sad and scared. He goes to the lake and sees a flock of beautiful white birds flying overhead. He wishes he could go with them.


The farmer finds the duckling at the lake, and takes him back to the farm. Nothing has changed. The animals continue their bullying. He is absolutely miserable.


Time marches on, as it does in nature, and the seasons change. Little does the bird know that he is changing too.


One day the despondent duckling, waddles  back down to the lake, where the beautiful white birds have returned to. They call to him which is a huge surprise. He wonders why these birds would want to talk to him. ‘You are the most beautiful swan we have ever seen,’ they say.

He doesn't understand their comment. He is confused... until he sees his reflection in the lake. A striking white swan stares back. He suddenly realises that he is a swan! What a revelation. He has found his type. He has found where he belongs.

Of course, as most fairy tales go, it all ends happily ever after, as the swan flies off with the other swans. No longer is he the ugly duckling...
#﻿


Awww how sweet. Now I must admit, I have loved this story since I was a girl. It has always spoken to me about ‘looks’ and ‘difference’.


‘Looks’ and ‘difference’ are two subjects very close to my heart. Particularly as I have grown up with a face that was considered ‘deformed’. I experienced many of the isolating incidents noted in the fairy tale. I didn’t know I was different when I was born. I didn’t know I was different when I was a baby. But as a toddler I soon became aware. How did this happen? The adults and teenagers who I came into contact with, told me. They stared at me. They pointed and snickered, and made rude remarks. The children who called me names. The children who wouldn’t let me play or would push me over. I wasn't treated the same as the pretty girls, or the sporty girls or the popular girls.

Now one could say that I was born in a time where anyone who was different was persecuted in some way.


In a small way, yes, but in a massive way, no.  Did my husband or myself, tell our children that they were different? No. Then why did Melissa in Year Two, tell me, ‘I’m different Mum.’ The other kids in her class told her. They pointed out her big eyes. They told her that her face wasn't normal. Did Melissa cope with this? No, she didn’t. In fact she was confused and started acting out. We needed to take her for counselling for her to cope with this new identity they were pinning on her. What were these children saying – you’re not like everyone else, and you should be!


We have seen ‘difference’ in our youngest child in another way. Children have accepted her. It is the adults who have labelled her and attached preconceived ideas to that label. I guess the most frequent comment we hear is, how 'amazing' she is. Well yes she is amazing because she is ours.... but that's not what they are referring to. The fact that Jessica can talk and perform on stage, and generally do the things that other ordinary children do, people are amazed. Sometimes we are thrilled, just as we are with our other children when they achieve great things, but we are not amazed. We know that our child has the potential to do many of the things that the other children can do. That’s why she is in mainstream school. Jessica may not have the IQ of an ordinary child but she is more the same than different. She wants the same things as every other child. She wants love, to be listened to, to learn, to be valued, to have friends… She loves One Direction, Taylor Swift and the movie Frozen.


It seems that the human race loves to make judgements about fellow citizens of the earth. Judgements are made about skin colour, the prettiness of the face, the figure,  religion, clothes and the stuff that is owned. Even if nothing is known about someone, people make assumptions. For example, if you see a Muslim, do you automatically think they are a terrorist? If you see a person with black skin, do you automatically think they must be shady? If you see a person driving a BMW, do you presume they have lots of money? You get the idea, I am sure.


I find it ironic that we love animals that are different. Ugly Cat is a phenomenon. If it was Ugly Susan, would she be a phenomenon? I don’t think so.


I like the quote I began with, as it is so true. You have to be strong and brave to embrace your individuality, and not get caught up in the crowd, or change to fit in. Children and teenagers know the pressure. Standing on your own, can have the consequence of being shunned. It can be a lonely existence. How many 'ugly ducklings' are in the world?

A final thought: If more people looked at the heart, and not at the exterior, we would have a better planet with more peace, love and harmony.

I like the two pictures below. They show a positive attitude towards being happy with how we are. 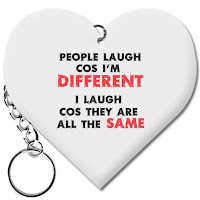 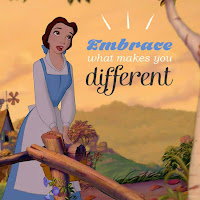 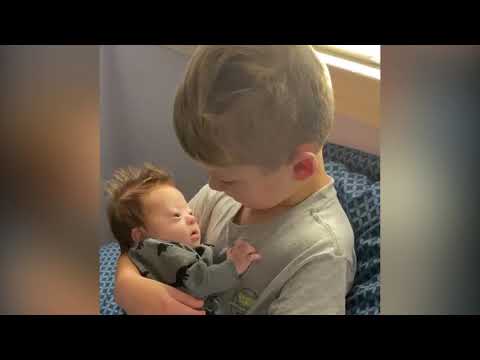