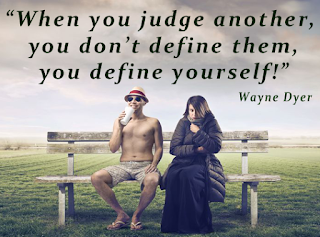 J is for Judgement

Today I read a touching story written by a lady, Suzie. She recounted an outing to the grocery store. The day was cold and her baby Carly kept kicking off her shoes, so Suzie left them off. While shopping Suzie felt she was belittled and spoken to rudely by three people. Before leaving the store, an overtired Carly began to cry, adding to her mother's distress. The heroine of the story was the cashier who cuddled the baby and spoke in a caring way to Suzie.

This is a nice story in the fact that someone helped Suzie, but the fact that the cashier and Carly both had Down syndrome add further to it.

Was Suzie judged? Was the cashier judged?

‘I interacted with a lot of people at the grocery store. There was a woman who scolded me for not having shoes on Carly on a cold day, (she kicked them off), a clerk who was less than interested in helping me find an item, and an impatient person that shoved past because we were following behind an elderly gentleman that was moving slowly when they were in a hurry.

Some people feel like people with Down syndrome don’t contribute anything meaningful to society, but amidst all the Grinches today, she stood apart. And just being her, she gave us an amazing gift. A smile.”

A Current Affair aired a story about Jordan who has Cerebral Palsy and a speech impairment. The story showed Jordan with his walker, in a city square, asking for directions to the bathroom. It was distressing for me to watch the large number of people who ignored his requests even though they willingly gave directions to his able-bodied mate, Conan.

The public made judgements about Jordan, maybe even subconsciously, which led them to ignoring him.
*

Do you pass judgements on people?

I think we’d be deceiving ourselves if we said we don't. Whether it’s over people frittering their money away, those addicted to substances, the lady having an abortion, homeless people, or non-English speaking group talking in their own language instead of English, we often have an opinion, or a judgement, without knowing the story or situation. 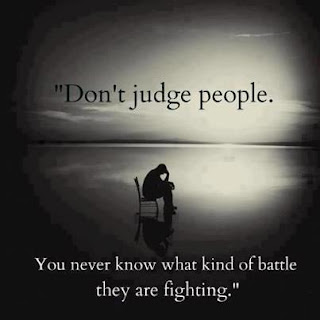 All five members of my family have been judged - for just being ourselves.
*

So what do you do, when you're judged?

You can accept, believe, ignore or challenge.

Growing up I actively challenged people's presumptions about my intelligence. I became a high achiever, a perfectionist, and an active participant in any activity I thought I'd achieve in. I wanted people to know that they were wrong.

My husband and myself either ignored or challenged people's opinions of our relationship and our family work/life decisions. We lost friends in the process.

Nick ignores the judgement. He doesn’t care what others think.

We've had to challenge presumptions made about Jessica. She has strengths and weaknesses, and she also has what we call the 'Jessica factor' - the determination to learn something when she desires to. For example, Jessica wants to ride a regular bike, so she has a regular bike and she's learning. We didn't buy her a disability bike. She wanted to play the drums, so we bought her a real drum kit, not a toy one. She wanted to make her own YouTube video, so we did that. I'm sure you get the idea.

Have you accepted, believed, ignored or challenged judgements made against you or a loved one?

If you accept or believe these judgements, they can be soul-destroying. They can lead to anxiety and depression. They can make you question your dignity, your worth, your value.

If you give in to these judgements you're allowing other people to control you. You should be in control of your life and decisions, not others.

If you need advice, seek it. But then make your own decision and stand by it.

Reading above, it might sound like we've only ever been judged, but that is not so. There have been many wonderful people, friends and family, who haven't passed judgements, but instead have supported, encouraged and loved us. Some from my childhood, others newer, but totally accepting and caring.

A good example of people actively supporting us is what we have experienced with Jessica and our local swimming club. We joined Nick up first. One of the ladies who knows Jess from swim lessons, asked why we hadn't signed her up too. We said because she can't swim well enough (we'd read the rules of joining). She told us that Jess should be coming and they'd have a support person in the water with her, so the swimming ability wasn't an issue. We joined her up, and her accomplishments are celebrated just like the others.
*

Wouldn't it be a much nicer world, if before we opened our mouths to have our five cents worth, we found out the story, or even without knowing the story, we offered support and encouragement? If we showed more love, than criticism?

I will finish with this quote from the Dalai Lama. 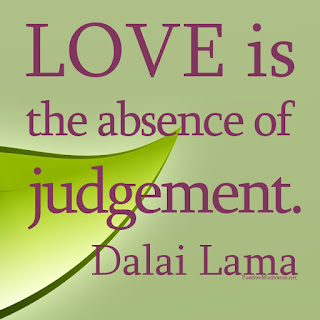