What's with the Facial Scars and Subliminal Messaging in JOJO RABBIT? 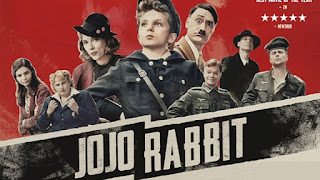 Last weekend I was asked by a friend who has a facial difference, what I thought of the use of facial scars in the movie JOJO RABBIT. Now I hadn't seen the movie, as the trailer showing a child with Adolf Hitler as his imaginary friend, had instantly turned me off.

She then aroused my curiosity even more with her statement, that maybe the healing of the facial scars was a metaphor for JoJo's changing attitude towards the Jews. Anything facially related I have to see for myself - so of course I watched it - and in fact, three times.

If you are unfamiliar with JOJO RABBIT, here is a pretty good synopsis:

It is interesting that the majority of synopses I read, did not include a mention of the facial scars JoJo receives, and nor does the trailer.

I could tell straight away that JoJo Betzler was a fanatical 10-year-old Nazi youth. There were a few laughs at the Hitler Youth training camp, though Rebel Wilson's comedy did not come across well. I saw that JoJo's face was 'normal' so I was waiting on the edge of my seat for when the accident or incident would occur.

The accident came soon after JoJo was told by the leaders to twist a rabbit's neck and kill it. He refused. They then killed the rabbit in front of him and bullied him about being weak... Now I must say I didn't see the funny side of this scene at all. It actually horrified me. JoJo ran off upset, had a chat to his buddy Adolf Hitler who pumped him up and sent him back to the throng feeling strong and courageous. JoJo grabbed a hand grenade and threw it. It hit a tree and ricocheted back to his feet, exploding. 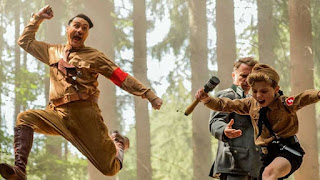 The explosion affected the left side of JoJo's body from his face down to his leg (he limps).

Over the rest of the movie JoJo's face slowly heals and his limp recovers.

The story continues with JoJo, due to his injuries, not being able to join the troops and being put to work on jobs around the town e.g. putting up posters, collecting metal etc. After seeing a crack in the floor boards he finds a Jewish girl who's been hidden by his mother. Of course JoJo's mind is full of propaganda and lies about the Jewish people so he isn't very happy, but over time he gets to know Elsa and love her. I must say that JoJo has a well developed character arc. His mother is caught for her anti-Hitler advocacy and hung (I couldn't see the satire in that either).

I do wonder how a child becomes so brainwashed as JoJo was with a mother who was the complete opposite. How did JoJo become that way?

Anyway, back to the facial scars which is what I want to focus on.

The left hand side of JoJo's face is crisscrossed in scars. To me he looks okay - I've seen a lot worse, but I tried to put him in the context of the day. 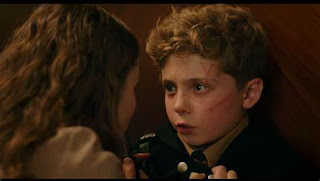 In his bedroom, JoJo looks at his face and his mother comes in.
JoJo says, 'Your son is ugly like a monster.'
She replies, 'Hey you're no monster. Besides your scars will heal and you'll get most of the movement back in your leg.'
JoJo retorts, 'But I'll never be in Hitler's personal guards.'
And she responds with,  'Ah, you're fine as you are. I'm just happy to have you back home.'

I have no complaints whatsoever with this interaction. Rosie, his mum is comforting and loving.

In the next scene JoJo is dressed in his Hitler youth uniform to go outside. At the door he tells his mother, 'I don't want to go out there,.. I look stupid. People will stare.'
She replies, 'Enjoy the attention kid, not everyone is lucky enough to look stupid. I for one am cursed to look incredibly attractive. Now you're going to pluck up your courage, walk out that door and have an incredible adventure.'

This took me aback. I guess Rosie is trying to tell JoJo that facial scars are a good thing, but there was no denial in his thoughts that he looked stupid or that he would be stared at. Why did she agree with him? And to say she was cursed because she looked so incredibly attractive - what the???

As a child having grown up with a 'deformed' face as I was told, being stared at and pointed at, nasty comments made about me and trying to prove I wasn't stupid, on a daily basis, this hit me hard. I wasn't impressed.

I did though like Rosie's final words of telling JoJo to suck it up and go out into the world because she could have let him stay hidden at home which is more realistic of the time period. 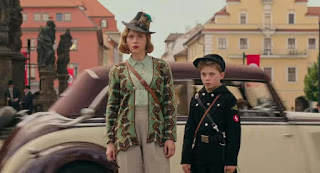 Next when JoJo is at the rehab pool with other legless adults and children, Rahm (Rebel Wilson_ stretches his leg, saying, 'Soon your leg will only be a little bit deformed and pointless. I'm going to recommend another month off school though, because your face might scare the other kids. It's kind of ugly.'

Again the message is, that if you have facial scars you are ugly and shouldn't be seen out in public. Yes put in the time period this would have been the norm, but this movie is being shown today and that's not the message we want to be sending. Children need to be shown people with facial differences so they are not frightened when they see someone and facial differences need to be portrayed in a positive light. The subliminal message needs to be one of positivity.

The next scene occurs when JoJo is in his bedroom talking to Adolf and he asks his imaginary friend, 'Do you think I'm ugly.'
Adolf replies, 'Yes.'

So again, it is reinforced and by this stage I am shaking my head trying to make sense of why. And anger is boiling in my belly!

The final referral to his facial scars occurs towards the end of the movie when Adolf is upset with JoJo because JoJo has feelings towards Elsa the Jewish teen. Right in the beginning of the movie Adolf calls JoJo 'really good looking,' and now he tells JoJo that Elsa is too old for him, he is ugly and she's going to leave him.

What message does that say to you? To me it says once again that facial scars make people ugly, and you won't be able to maintain a relationship because of them. 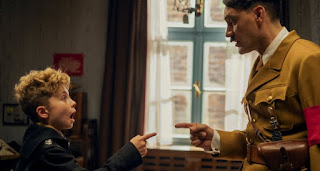 After this JoJo lets Elsa out of their house and she sees that the Americans are now in control and they both dance.

Now obviously I have left out a lot of the story which does not relate to facial scars. And to be honest there were many poignant moments throughout the movie. There were comedic moments and the dark humour came through more when I watched the movie with subtitles.

But as a person having grown up with a craniofacial syndrome, and been told I was ugly and stupid, and feeling that no one would love me, this movie hit me hard. My parents were told to hide me away though they like Rosie, pushed me out into the world.

Particularly during my first viewing, a knife JoJo had as part of his uniform, was stabbed into my heart. I just do not understand why the facial scars were included, or why there was the consistent message that facial scars make you ugly, a monster, stupid and unlovable. And why has no one done a commentary on this part of the movie? Is it acceptable?

To me, it is totally unacceptable.

Possibly the healing of the scars could be a metaphor as my friend suggested - that as JoJo's face and leg healed his warming and acceptance of the Jewish people changed... but I find that hard to believe as scars and legs with therapy heal over time anyway. The character arc would have happened if his face had stayed red and raw.

It is also interesting that much of the movie was filmed with JoJo's scarred side turned away from the camera. I particularly noticed this when I was looking for photos to add to this article. There are very few publicity photos that show his scars. Why is that? 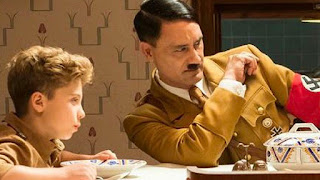 I will leave this review here but I would really like you to think more about this. When you see a person with facial scars, what is your immediate reaction?

Would you call them beautiful or ugly?

Would you call them stupid or believe they have normal intelligence?

Are they deserving of love?

Did you respond with similar answers that are subliminal in JOJO RABBIT?