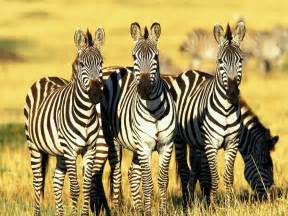 Z is for Zebras

Oh zebras why do I love thee?

I love your stripes
Your unique designs
I love your beauty
You're just devine!

This month's blog is not a serious one. I chose zebras because they are my favourite animal. Why? I don't actually know. I'm not into horses at all. I tried riding one when I was in university and fell off whacking my head, and haven't been back on one since. I had gone out to Roma to a friend's property. I had to ride bareback and going down an incline I toppled off. But give me a zoo where there are zebras, I will sit and watch them for as long as my family allows. If there's an African documentary on TV featuring zebras, I will watch it. If I see pictures or ornaments out and about I will stop and examine them. I have photos of zebras up in my loungeroom. My friend's husband who was a photographer gave us a black and white framed photo of zebras for our wedding present. I have a stuffed animal collection of zebras. I nearly bought a large zebra at Bunnings the other day, but refrained as I had nowhere to put it.

I found this poem which I thought was really cute. It asks the question - something I have pondered at times - is the zebra black with white stripes, or white with black stripes??? 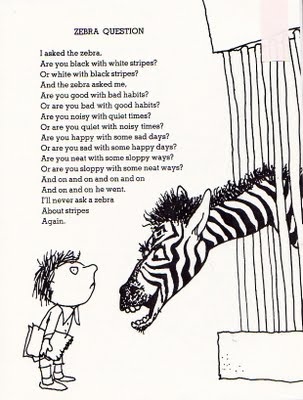 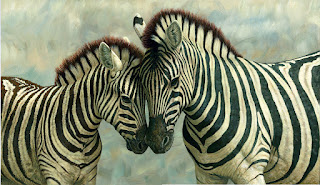 Some interesting facts about zebras:
https://www.livescience.com/27443-zebras.html

Do you have a favourite animal? Why do you like it? Tell me below.

Email ThisBlogThis!Share to TwitterShare to FacebookShare to Pinterest
Labels: diversity