W is for Wonder 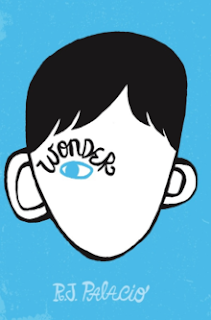 There has been a lot of talk lately about the above children's novel, Wonder written by Raquel Jaramillo, under the pen name of R. J. Palacio. It was published on February 14, 2012.


Explanation of Wonder at Wikipedia

When I finished the story I had mixed feelings. The first page could have been written by me when I was a child and about my children when they were young. We did ordinary things, but others did not see us as ordinary children. Because our faces were 'abnormal', we were seen as different. Being different meant stares, pointing and comments.

The hardest thing about being born with a facial syndrome, is you can't hide your face. In the story, Auggie wears a motorcycle helmet to school - to me that seems a bit extreme. But I must confess to putting blankets over my children's prams when I didn't feel up to dealing with the public and wearing of sunglasses always hides eyes that are bulgy or turned.

The difference between Auggie and my experience, as well as my children's, is that we lived in the same town from babyhood to adulthood. Auggie lived in New York, which I suppose is why he wasn't well known (though I question this). We were known around the town from the moment we were born. It was only places where we weren't known that we struck the most difficulties.

Some of the chapters in Wonder are about Via, Auggie's older sister. Via was angry and sad about having a brother with a facial disfigurement. I know that my two older brothers still carry emotional scars from having me as their little sister. They hated that I had frequent medical appointments, and would get into physical fights at school protecting me. There were times that they would ignore me and not want me around. One of my brothers bullied me as well. In my children's case, the older two both have the syndrome and in some ways this mutual similarity has brought them closer. My youngest daughter is oblivious to them being different.

Auggie only had a few friends in Wonder. I was blessed with many friends. And my friends stood up to those who picked on me. I was invited to parties and playdates. I went to sleepovers. I played sport and was in Girl Guides. My best friends stayed best friends into adulthood. Something that Auggie didn't seem to have experienced.

My children did not experience the amount of bullying I did. Overall they were accepted. My daughter had friendship difficulties all the way through school, but whether it was her personality, the clickiness of the girls in her grade, some of her autistic traits or her face, we do not know. Auggie's small number of friends was attributed only to his face. In Year Two the other kids told my daughter that she had big eyes, and she didn't know how to cope with this. She didn't think she was different, so it was a shock to her to be told that she was. She acted out at that time and we had to work through the situation with her. In Year Four, my daughter had a facial halo on her face for four months. The halo pulled the bones in the middle of her face forward. She decided that she wanted to go to school with it on, once it was safe to do so. This was a massive thing for her to do but she did it. No one teased her about the halo. In fact most of the children were in awe of her braveness. We have photos of my daughter acting in the end of year play with her face painted around the halo and a flower in her hair. She had no bullying at all after this, though her friendship difficulties continued. She flourished until the end of Year Nine.

My son found his group early on and those friends have stayed with him from the beginning grades of primary school through into high school. Due to his surgeries my son was not allowed to do sports or play rough, so his group of friends have always been girls - and this has never bothered him. The other boys accepted the situation and if they did say something to him, it was water off a duck's back. My son didn't care what others thought. I can't say that my children's experiences mirrored Auggie's at school.

I guess the part of the story that most bugs me is the last part of the book about Julian. I have not heard of any child who's had nightmares about how my children looked. No parent ever reacted to them the way Julian's parents did and no way would someone be so callous as to photoshop out their faces. In fact my photos with my facial syndrome have been shared over facebook by my friends who I grew up with.

Now there are things about Wonder I like. It shines a light on people born or living with facial disfigurements. It highlights the amount of surgeries some children need to go through. (I had four, my daughter's had twelve, and my son's had eight) The book shows the different reactions kids can have. It focusses on bullying. It shows that Auggie sees himself as an ordinary child, though others don't. It shows the anxiety people who are different can encounter when they have to meet people for the first time, or go somewhere for the first time.And I like that it tells people to be kind to people born different.

At this point I must promote my own book, Ride High Pineapple. In my story, the main character, thirteen-year-old, Issy Burgess, also was born with a craniofacial syndrome (Crouzon syndrome). This is the syndrome that myself and my two children have. Issy is fictional but she is a mash-up of mine and my daughter's experiences in high school. The story, written as a journal, is real, honest and raw. People who know me and have read it, say they can hear my voice as they read it. Ride High Pineapple is a very different story to Wonder. It is about overcoming the bully by working on your passion, which in Issy's case is her love of skateboarding. The story is about not keeping secrets. It is about how awesome friendships can be, and the ups and downs girls experience. It is about dealing with severe anxiety by using the analogy of 'becoming a pineapple'. And Ride High Pineapple is also an Australian story which makes it unique. Anyone who was born different will identify with something in the story.

Ride High Pineapple is available online as a paperback or ebook. I would love people to read my story. 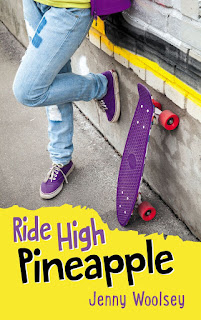