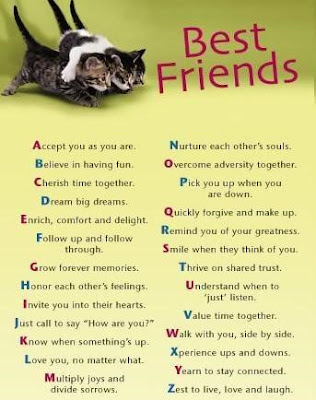 F is for Friendship
﻿
I want to begin this blog post by sharing with you, a message my 14 year-old daughter received this week on Facebook. It was from one of her friends:
You’re beautiful. I know that being different is hard and having medical problems can bring you down. But I’m proud to call you my friend because you’ve held your head high and kept a smile on your face. Keep being your awesome unique self. 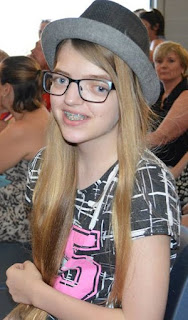 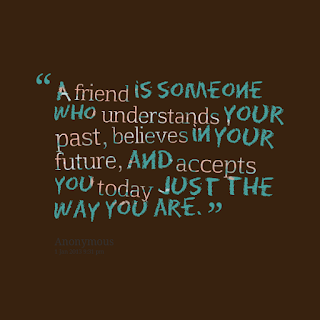 I think you will agree with me that this is a wonderful, heartfelt message. I must admit I was blown away when I read it. Melissa doesn’t say a lot about school. When we ask her how things are, her standard answer is ‘Good’. After I commented to her about this compliment, she told me that kids have said that she looks weird when she isn’t wearing her glasses. Now I think the ‘weird’ is not necessarily a nasty thing – it just means she does look different. Her face, and particularly her eyes, are laid bare for everyone to see. Her craniofacial syndrome is on display. But the inspirational thing about Melissa is that she is fine with this. Her attitude is 'I'm different and that's me. Deal with it'. She is unique in other ways too. She likes Japanese music and animation. She likes heavy metal music and wearing what I would class as 'skater boy' clothing. She loves astronomy. She hates pink.... and she follows alternative Youtubers. Basically, she is her own person. She hasn't tried to change to fit in, like I know many teenagers do. I am very proud of Melissa for this. In fact I admire her and am inspired by her. I really wish I had that attitude when I was a teenager.
How many of us can say we were happy in our own skin when we were fourteen?
I think this comment has also made its mark on me because Melissa always struggled to form friendships. I remember in Year One, she tried to fit into the ‘popular group’ but it didn't work out. In Year Two, she was told by some of the other children in her class, that she had big eyes. This really confused her, as no one else had said that to her, or if they had, she was oblivious to what they meant. We had been raising her like she didn’t have big eyes, even though we knew society knew she did.
In Year Two, the ‘you’ve got big eyes’ started.
One incident in particular, that stands out in our memory which happened before Melissa realised she was different... was when Joe had brought her back to school after she had been at the ophthalmologist. She had been given eye drops to dilate her pupils. A boy said to her 'Why are your eyes so big?' Her response was, 'The doctor put drops in my eyes'. She had no idea what he was referring to.
Poor Melissa suddenly did realise that the kids weren't talking about her pupils, but her eyeballs. This confused her and she didn't know how to handle it. She started to act out and became quite naughty. This 'label' affected her socially. She would barge into groups and be an attention-seeker.
We ended up taking her to see a psychologist who helped her. But for the rest of primary school she still struggled. It was in high school that she finally found her ‘group’. Some of her group, knew her from primary school, others didn’t.
Her group generally consists of the kids who are different and unique themselves. They are not the popular group. They are teenagers who have found each other and probably had C.S. Lewis's conversation in one form or another: 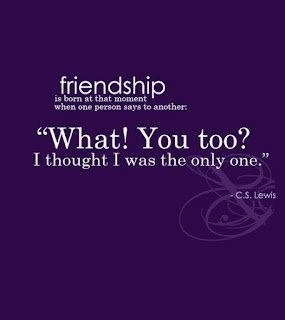 Have you found your group?
With our youngest, Jessica, who has Down syndrome, we always worried about friendships. We needn't have. The number of children who say hi to her, and look after her, is phenomenal. In Prep they would fight over who would be her helper. Jessica sees all children as her friends which in itself has caused problems. Children have been upset because she flits from person to person. On her school desk yesterday was a pile of Christmas cards from her classmates. She is accepted for who she is, and that's what friends do.
* 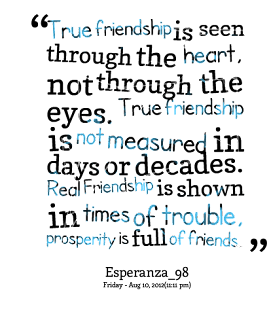 Friends are important, though there are times when they will let you down. I remember when Melissa and Nick were little, and going through their skull surgeries. The people I called friends at that time didn't phone, text or visit. I was told they were busy. That hurt and led me to realise quickly that I needed to find friends who weren't too busy to support me in my time of need. I found them in a church.
Since leaving teaching, with more time on my hands, I have sought out more friends. I think this is important. Friends don't normally just drop in your lap - you have to invest time and effort into finding people who could potentially be friends, then time and effort into the relationship (just like a marriage). I have been blessed with friends who have disabled children; who are at my old and new church; who are parents at my children's schools; and others who are writers. Some of my friends fit into more than one category. Within these groups, I know who I can call on in an emergency, and that is a blessing. It's been many years since I've had an emergency contact other than my mother.
Where have you found friends?
I have to say as well, that some people come into your life as friends for a season. Since I was little I have had friends who were there for a while, sometimes years, and then things happen, and they are gone. Life changes and the contact wanes. I have other friends who I've had my entire life, who I don't see a lot of because of distance, but are still dear to me.
*﻿
When human friends or family aren’t around, they can provide great comfort. You can talk to them, walk them, spend time with them. It is well known that animals can reduce stress.
This is Jess sleeping with one of our cats a couple of nights ago. She loves our pets. (We all love our pets!) 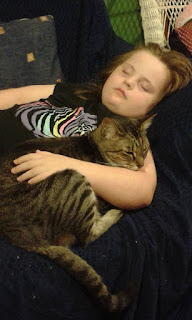 ﻿
Do you have a pet that is your friend?
I found this letter My Dear Friend on-line. I would like to dedicate it to the people who are my friends; and who are my children's friends. Thank you. :) 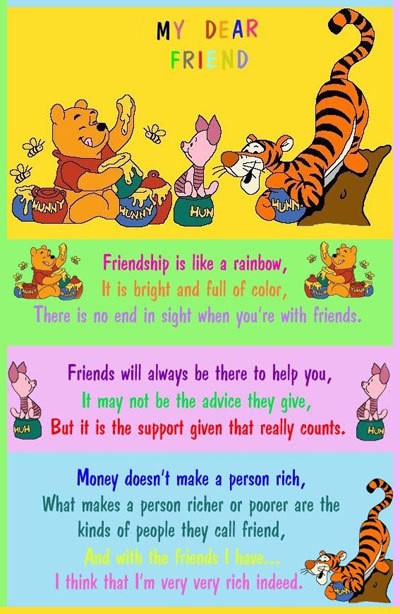